Today we are featuring a song about a borough..not a town. It comes from Leonard Cohen. It’s pretty funky so please check it out. 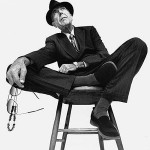 Leonard Norman Cohen, CC, GOQ (born 21 September 1934) is a Canadian singer-songwriter, musician, poet and novelist. His work often explores religion, isolation, sexuality and interpersonal relationships.[1] Cohen has been inducted into the American Rock and Roll Hall of Fame and both the Canadian Music Hall of Fame and the Canadian Songwriters Hall of Fame. He is also a Companion of the Order of Canada, the nation’s highest civilian honour.

While giving the speech at Cohen’s induction into the Rock and Roll Hall of Fame on 10 March 2008, Lou Reed described Cohen as belonging to the “highest and most influential echelon of songwriters.