This week is Beatles Week on the podcast..songs from all”5″ of them??? Today we start with Ringo Starr. Check it out. 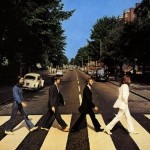 Abbey Road is widely regarded as one of The Beatles’ most tightly constructed albums, although the band was barely operating as a functioning unit at the time.[1][2] Rolling Stone placed it at number 14 on its list of “The 500 Greatest Albums of All Time“. In 2009, readers of the magazine also named Abbey Road the greatest Beatles album.[Read More