Back from our summer break and today we have Melissa Etheridge’s coming out song, if you will. It’s a great one with a great back story too. 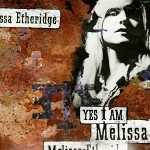 Melissa Lou Etheridge (born May 29, 1961) is an American rock singer-songwriter and activist.

Etheridge is known for her mixture of confessional lyrics, pop-based folk-rock, and raspy, smoky vocals.[1] She has also been an iconic gay and lesbian activist since her public coming out in January 1993.[2]

Born in Leavenworth, Kansas, the younger of two girls, to John Etheridge, a psychology teacher at Leavenworth High School, and Elizabeth Williamson, a computer consultant. She attended David Brewer School, which is still located at 17th and Osage Streets. She graduated in 1979 from Leavenworth High School (LHS), 10th Avenue and Halderman. Etheridge was a member of the first “Power and Life” musical/dance group at LHS.(No longer active) Her childhood home was at 1902 Miami Street.

Etheridge’s interest in music began early; she picked up her first guitar at 8. She began to play in all-men country music groups throughout her teenage years, until she moved to Boston to attend Berklee College of Music.

While in Berklee, Etheridge played the club circuit around Boston. After three semesters, Etheridge decided to drop out of Berklee and head to Los Angeles to attempt a career in music.[1] Etheridge was discovered in a bar called Vermie’s in Pasadena, CA. She had made some friends on a women’s soccer team and those new friends came to see her play. One of the women was Karla Leopold, whose husband, Bill Leopold, was a manager in the music business. Karla convinced Bill to see her perform live. He was impressed, and has remained a pivotal part of Etheridge’s career ever since.[3] This, in addition to her gigs in lesbian bars around Los Angeles, got her discovered by Island Records chief Chris Blackwell. She got a publishing deal to write songs for movies including the 1986 movie Weeds.[4]

In 1985, prior to her signing, Etheridge sent her demo to Olivia Records, a lesbian record label, but was ultimately rejected. She saved the rejection letter, signed by “the women of Olivia”, which was later featured in Intimate Portrait: Melissa Etheridge, the Lifetime Television documentary of her life.

After an unreleased first effort that was rejected by Island Records as being too polished and glossy, she completed her stripped-down self-titled debut in just four days. Her eponymous debut album Melissa Etheridge was an underground hit, and the single, “Bring Me Some Water“, a turntable hit, was nominated for a Grammy.