Back with more Classic Deep Cuts this week.  Today we start off with a great one from Brewer And Shipley. 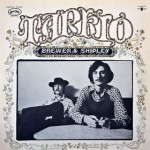 Brewer & Shipley were an American folk rock music duo of the late 1960s through 1970s, consisting of singer-songwriters Mike Brewer and Tom Shipley. They were known for their intricate guitar work, vocal harmonies, and socially conscious lyrics which reflected the concerns of their generation — especially the Vietnam War, and the struggles for personal and political freedom. Their greatest commercial success was the song “One Toke Over the Line” from their 1970 album Tarkio. They also had two other single albums which scored the Billboard charts: “Tarkio Road” (1970) and “Shake Off The Demon” (1971). They continue to perform, both separately and together, usually in the Midwest of the USA.