Great song from It’s A Beautiful Day today. From their eponymous debut album. No not the one you’re thinking of…the other one. 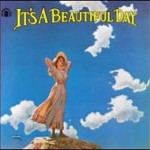 It’s a Beautiful Day is an American band formed in San Francisco, California, in 1967, featuring vocalist Pattie Santos along with violinist David LaFlamme and his wife, Linda LaFlamme, on keyboards.

David LaFlamme, a former soloist with the Utah Symphony Orchestra, had previously been in the band Orkustra, and unusually, played a five-string violin. The other members were Linda LaFlamme (keyboards), Pattie Santos (vocals), Hal Wagenet (guitar), Mitchell Holman (bass) and Val Fuentes (drums). Although they were one of the earliest and most important San Francisco bands to emerge from 1967’s social phenomenon Summer of Love, the band never quite achieved the success of contemporaries such as The Grateful Dead, Jefferson Airplane and Santana, with whom they had connections. The band created a unique blend of rock, jazz, folk, classical and world beat styles during the initial seven years it was officially together.