This is probably one of the coolest songs we have featured. If you haven”t heard it you should really give it a listen. It”s been going through my head for the last few days so I thought I would put it out there for you. It”s by The Nails…check it out please! 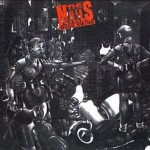 Two years later they released Dangerous Dreams, also on RCA. Both Mood Swing and Dangerous Dreams made the Billboard top 200 album chart and were critically acclaimed. But after the release of Dangerous Dreams The Nails left RCA. RCA did not release either LP on compact disc. “88 Lines About 44 Women” continued to appear on compilations 20 years after its release and was featured in a Mazda television commercial that aired in the late 1990s.

In 1988, the band reconvened (without Guthrie and Dave Kaufman) to record a third album, Corpus Christi, which was not released until 1993 and received little exposure. The Nails deny ever receiving any proceeds from this album, citing a rift with their former producer, claiming that he swindled them of their rights. They posted re-recordings of these songs on the late George Kaufman”s site, along with the explanation of the dispute. They strongly discourage fans from purchasing the album, as they will never be compensated.[2]

In 2007, the band licensed Mood Swing and Dangerous Dreams from RCA parent company Sony-BMG Entertainment and released these albums on compact disc for the first time.

In March 2009, bassist George Kaufman died of complications following heart surgery. He was survived by his wife, Sharla, and his children, Isabel and Michael Kaufman.