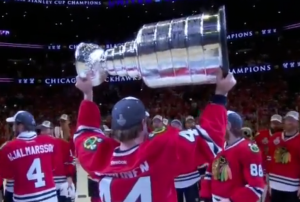 ….John Poulter joins us to talk about how the Chicago Blackhawks win a third Stanley Cup Championship in six years, and Jeff Rich dissects the NBA Finals, as Stephen Curry’s Warriors Win the NBA title over LeBron James’ Cavs.

We also preview the US Open Golf Championships from Chambers Bay in Washington State this weekend with Rory Spears from Golfers on Golf.com.  Lastly, we talk about the Women’s World Cup being contested in Canad, and the latest NFL news from minicamps.