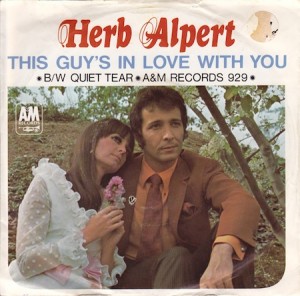 1968, Herb Alpert started a four week run at number one on the singles chart with “This Guys In Love With You.” It was his first chart topper, plus first number one for the A&M label, as well as for writers Burt Bacharach and Hal David

1968, The Rolling Stones go to number one in the UK with “Jumpin’ Jack Flash.” It was the first time they had visited the top spot in two years.

1968, The Jeff Beck group featuring Rod Stewart made their US debut at the Fillmore East, New York.

1968, The Otis Redding album Dock Of The Bay went to number one posthumously. Redding was killed in a plane crash on December 10th 1967.

1969, Singer, actress, Judy Garland, died of a barbiturate overdose at age 47. She was found on the floor of her rented Chelsea home, in London. She made more than two dozen films, most  notably playing Dorothy in  1939’s Wizard Of Oz, singing “Over The Rainbow” in the film. 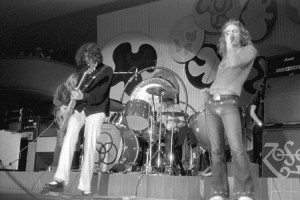 1970, Led Zeppelin appeared at Laugardalsholl Hall, Reykjavik, Iceland on the group’s one and only visit to Iceland. It is suggested that Robert Plant was inspired to write the lyrics to “Immigrant Song” during this trip.

1974, Gordon Lightfoot started a two-week run at number one on the album chart with Sundown.

1975, At New York’s Madison Square Garden, Eric Clapton joins the Rolling Stones onstage to jam on “Sympathy for the Devil.”

1978, The Boomtown Rats, supported by Matt Vinyl & The Decorators appeared at the Odeon Theatre, Edinburgh, Scotland.

1985, Bryan Adams started a two week run at number one on the US singles chart with “Heaven,” his first chart topping single, which made it only to number 35 in the UK.

2008, Coldplay went to number one on the UK singles chart with “Viva La Vida,” their first UK chart topper. The song won a Grammy Award for Song of the Year in 2009.

2013, “Blurred Lines” by Robin Thicke started a 13 week run at number one on the US singles chart. The song featured American rapper T.I. and American singer and producer Pharrell, the video was made in two versions; the first video features models Emily Ratajkowski, Jessi M’Bengue, and Elle Evans being topless, the second features them covered. The topless version of the video was removed from YouTube for violating the site’s terms of service regarding nudity, though it was later restored, but flagged as inappropriate. “Blurred Lines” topped the charts in 14 countries.