1966, At the Cow Palace, the Beach Boys’ Summer Spectacular features performances by the Jefferson Airplane, the Lovin’ Spoonful, Percy Sledge, the Byrds, and the Sir Douglas Quintet.

1966, After holding a press conference aboard a yacht in New York City, The Rolling Stones kicked off their fifth North American tour at the Manning Bowl, Lynn, Massachusetts, with support acts The McCoys and The Standells.

1967, The Monkees went to number one on the US album charts with Headquarters, the group’s third chart topper.

1967, Pink Floyd make their debut performance on the BBC’s Top of the Pops, performing their new single “See Emily Play.” Syd Barrett wears a suit of velvet and satin.

1967, Procol Harum’s “A Whiter Shade of Pale” entered the Billboard chart, where it would peak at number five. The song was written by the band around a melody composed by the group’s organist, Matthew Fisher. He was inspired by the chord progression of Johann Sebastian Bach’s “Orchestral Suite in D,” composed between 1725 and 1739.

1969, Led Zeppelin recorded “Whole Lotta Love,” “What Is And What Should Never Be,” “Travelling Riverside Blues,” and “Communication Breakdown” for BBC Radio 1 at Maida Vale Studios, London. The session was broadcast on June 29, 1969.

1969, The Doors appeared at The Roach, New Orleans, Louisiana. 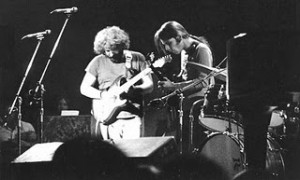 1991, Frank Zappa took part at the concert “Adieu Soviet Army,” organized in Prague, as the farewell to the last soldiers of Soviet Red Army, leaving free Czechoslovakia (the Red Army had occupied Czechoslovakia since the Prague spring). This was probably Zappa’s last rock appearance on the stage and it is recorded on the album Adieu C. A. (Soviet Army).

1999, Eric Clapton put 100 of his guitars up for auction at Christie’s in New York City to raise money for his drug rehab clinic, the Crossroads Centre in Antigua. His 1956 Fender Stratocaster named Brownie, which was used to record the electric version of “Layla,” sold for a record $497,500 (£331,000.) The auction helped raise nearly $5 (£3.33) million for the clinic.

2001, Blink 182 scored their second US number one album with Take Off Your… The group’s fourth studio album has sold over 12 million copies worldwide and contains the singles “The Rock Show,” “Stay Together for the Kids,” and “First Date.”

2007, The White Stripes went to number one on the UK album chart with Icky Thump the duo’s sixth and final studio album. Icky Thump won a Grammy Award for Best Alternative Music Album in 2008.