You are here: Home / Archives for Bon Jovi 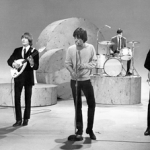 1964, The Rolling Stones appeared for the first time on The Ed Sullivan Show from New York, performing "Around And Around" and ‘Time Is On My Side." A riot breaks out in the studio, prompting Sullivan’s infamous quote, “I promise you they’ll never be back on our show again.” The Rolling Stones went on to make a further five appearances on Sullivan’s show between 1965 and … END_OF_DOCUMENT_TOKEN_TO_BE_REPLACED

1966, Pink Floyd (who were paid £15 for the gig), The Move, Denny Laine, and Soft Machine all appeared at the launch for International Times at London's Roundhouse. 1966, The Four Tops started a two week run at number one on the US singles chart with "Reach Out And I'll Be There." The spot was previously held by "Cherish" from The Association. 1967, Cream played at the … END_OF_DOCUMENT_TOKEN_TO_BE_REPLACED

1966, The Who appeared at the Locarno Ballroon in Stevenage, England. This UK tour was notable for the addition of the single, "I'm A Boy" to the band's repertoire. 1968, Pink Floyd were forced to cancel a performance at the Chatelet Teenage Festival in Belgium due to work permit problems.  There were some violent reactions from the fans, but the several other bands, … END_OF_DOCUMENT_TOKEN_TO_BE_REPLACED

What did you hand out to the trick or treaters who came to your doorstep for Halloween? The 3D RadioActivity had music to give this week. Tune in, we Give You Just A Little More Time, Give You The Night, Give A Little Bit, Patience, Strength, and at least one reason... for Love and Peace On Earth. [jwplayer mediaid="6575"] Got any musical political ambitions for … END_OF_DOCUMENT_TOKEN_TO_BE_REPLACED