You are here: Home / Archives for Def Leppard

1964, "A Hard Day's Night" went to the top of the charts giving The Beatles their fifth US number one single in seven months. 1964, Billboard Magazine reported that the harmonica was making a comeback in a big way thanks to its use by Stevie Wonder, The Rolling Stones, The Beatles and Bob Dylan. 1965, During a UK tour, The Rolling Stones appeared at the London Palladium … END_OF_DOCUMENT_TOKEN_TO_BE_REPLACED 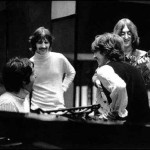 1968, Working at Abbey Road studios The Beatles continued with "Cry Baby Cry" adding new vocals, backing vocals, some harmonuim, tambourinnes, and sound effects. They recorded three takes of "Helter Skelter," including one lasting 27:11, the longest of their career, before the song was redone two months later. 1968, The Grateful Dead release Anthem of the Sun. Their second … END_OF_DOCUMENT_TOKEN_TO_BE_REPLACED

1965, Herman's Hermits play The Ed Sullivan Show. 1965, The Rolling Stones released the single "(I Can't Get No) Satisfaction" on the Decca label in the US. The song also featured on the American version of the Rolling Stones' fourth studio album, Out of Our Heads, released that July. 1965, The Who played at St. Joseph's Hall in London. 1966, Roy Orbison's first wife, … END_OF_DOCUMENT_TOKEN_TO_BE_REPLACED

1963, The album The Freewheelin’ Bob Dylan was released by Columbia in the USA. Establishing Dylan as a leader in the singer-songwriter genre and a supposed spokesman for the youth-orientated protest movement, it reached number 22 on the US charts and number one on the UK charts. The Freewheelin’ Bob Dylan showcased Dylan's songwriting talent for the first time and propelled … END_OF_DOCUMENT_TOKEN_TO_BE_REPLACED

1967, Jimi Hendrix set fire to his guitar live on stage for the first time when he was appearing at The Astoria in London, England. It was the first night of a 24-date tour with The Walker Brothers, Cat Stevens, and Engelbert Humperdink. The Fender Stratocaster burned on stage by Hendrix sold for £280,000 at a 2008 London auction of rock memorabilia. 1967, Pink Floyd played … END_OF_DOCUMENT_TOKEN_TO_BE_REPLACED