You are here: Home / Archives for Emerson Lake & Palmer

1967, Jimi Hendrix set fire to his guitar live on stage for the first time when he was appearing at The Astoria in London, England. It was the first night of a 24-date tour with The Walker Brothers, Cat Stevens, and Engelbert Humperdink. The Fender Stratocaster burned on stage by Hendrix sold for £280,000 at a 2008 London auction of rock memorabilia. 1967, Pink Floyd played … END_OF_DOCUMENT_TOKEN_TO_BE_REPLACED 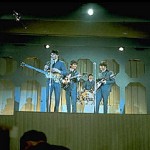 1964, The Beatles made their second live appearance on The Ed Sullivan Show, exactly one week after the first. Before an audience of 3,500 at the Deauville Hotel in Miami Beach, Florida. 1965, The Who perform at the Marquee Club where they are filmed for French television performing "Heatwave," "Tell Me More," "Shout and Shimmy," and "Smokestack Lightning." The footage is … END_OF_DOCUMENT_TOKEN_TO_BE_REPLACED

1965, The film Ferry Cross the Mersey premieres at the Liverpool Odeon. It was the first to be shot on location in Liverpool after the city's emergence into the music mainstream For authenticity, many scenes were shot in clubs near the home of Gerry and the Pacemakers' frontman Gerry Marsden. Marsden wrote nine new songs for the film which also starred Julie Samuel, Cilla … END_OF_DOCUMENT_TOKEN_TO_BE_REPLACED

There was a time when dinosaurs roamed the earth. I’m not talking about the Tyrannosaurus Rex, Hadrosaurus, or even your garden variety Pterodactyls. These dinosaurs wore coats of proggy sound typified by 20 minute epic-length, multi-movement suites of music. These were dinosaurs that really knew how to play their instruments. Dinosaur’s with classical training, and dinosaurs … END_OF_DOCUMENT_TOKEN_TO_BE_REPLACED