You are here: Home / Archives for Jackson Browne

Two weeks ago on The Award Winning 3D RadioActivity we featured a musical journey into fantasy, so on this episode we are playing songs about imagination: the ability of forming new images and sensations when they are indirectly perceived through sight, hearing, or other senses.  Imagination helps provide meaning to experience and understanding to knowledge; it is a fundamental … END_OF_DOCUMENT_TOKEN_TO_BE_REPLACED 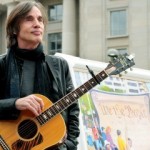 by Richard Lyman ... The Blumenthal Performing Arts Center is arguably Charlotte’s premier music venue. It hosts the Charlotte Symphony, the Opera, Broadway shows, the ballet and most of the big name rock acts who come thru town who care about good acoustics and only need to sell two thousand tickets. In theory, it was a great place for Jackson Browne to open his 2012 … END_OF_DOCUMENT_TOKEN_TO_BE_REPLACED