You are here: Home / Archives for Joe Cocker

1966, Supergroup Cream released their debut studio album Fresh Cream in the UK. The power trio of Eric Clapton, Jack Bruce and Ginger Baker also released their second single "I Feel Free" on the same day. 1967, The Doors appeared at the New Haven Arena, New Haven, Connecticut. Before the show, a policeman found singer Jim Morrison making out with an 18 year-old girl in a … END_OF_DOCUMENT_TOKEN_TO_BE_REPLACED 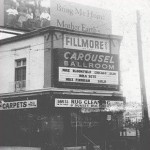 1965, The Grateful Dead and Jefferson Airplane played at the opening night of San Francisco"s Fillmore West. 1965, The Rolling Stones started a two week run at number one on the singles chart with "Get Off Of My Cloud," the group's second chart topper. The song knocked The Beatles "Yesterday" from the top spot. 1966, The Who play the Kongresshalle in Cologne, … END_OF_DOCUMENT_TOKEN_TO_BE_REPLACED

1966, Donovan went to number one on the US singles chart with "Sunshine Superman," a number two hit in the UK. The track featured then Yardbird and future Led Zeppelin guitarist Jimmy Page. 1967, During a 10-date tour of Sweden, The Jimi Hendrix Experience appeared at the Liseburg in Gothenburg, Sweden. 1968, After a two week absence, Ringo Starr rejoined The Beatles. Upon … END_OF_DOCUMENT_TOKEN_TO_BE_REPLACED

1966, The Who begin two days of recording at IBC Studios and Pye No. 2 Studio in London. During the sessions the group records The Regent's "Barbara Ann," The Everly Brothers' "Man with Money," Martha and the Vandellas' "Heatwave," and the theme to the then smash hit TV show Batman. The tracks are intended for a new album tentatively titled Jigsaw Puzzle. Kit Lambert produces … END_OF_DOCUMENT_TOKEN_TO_BE_REPLACED

1965, The Byrds were forced to cancel a concert during their UK tour at The Guildhall, Portsmouth when only 250 of the 4,000 tickets had been sold. 1966, During a North American tour The Beatles played two shows at Maple Leaf Gardens, Toronto, Canada. The attendance for each show was 18,000. 1967, The Who's manager Kit Lambert was at Columbia Recording Studio in … END_OF_DOCUMENT_TOKEN_TO_BE_REPLACED