1957, John Lennon and Paul McCartney met for the first time at The Woolton Church Parish Fete where The Quarry Men were appearing. As The Quarry Men were setting up for their evening performance, McCartney eager to impress Lennon picked up a guitar and played "Twenty Flight Rock" by Eddie Cochran, and Gene Vincent's "Be-Bop-A-Lula." Lennon was impressed, and even more so when … END_OF_DOCUMENT_TOKEN_TO_BE_REPLACED 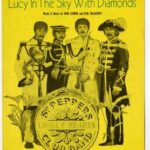 1967, The Beatles began recording  "Lucy in the Sky with Diamonds" at Abbey Road studios, London. Work on the new John Lennon song began the day before with extensive rehearsals. Despite the acronym of the song spelling out LSD, the origins of the composition came from a drawing that Lennon's son Julian had made of his classmate Lucy O'Donnell. John wrote a song inspired … END_OF_DOCUMENT_TOKEN_TO_BE_REPLACED

I was a rock snob during the 1970s and 1980s. I admit it, and for those that know me well, this revelation should come as no surprise. I loved prog rock, some southern rock, glam rock and glam’s second cousin disco. I had little tolerance for what I’ll term meat ‘n’ potatoes “dumb-ass” rock. As a result, I missed out on huge hit albums by Boston, Kiss and Bad Company, to … END_OF_DOCUMENT_TOKEN_TO_BE_REPLACED

After the demise of Mott The Hoople, Ian Hunter’s solo career got off to a strong start with his 1975 eponymously titled debut album. Not that the album was by any means a hit upon release, however it did have standout tracks like “Once Bitten Twice Shy” (brought to the charts x years later by Great White), “It Ain’t Easy When You Fall” and “The Truth, The Whole Truth, Nothing … END_OF_DOCUMENT_TOKEN_TO_BE_REPLACED

Ian Hunter is making records today that stand ever so tall in a catalog that includes classics by Mott The Hoople and solo staples like his eponymously titled debut album from 1975 and 1979’s classic “You’re Never Alone With A Schizophrenic.” Hunter and his current Rant Band have been on a roll releasing several stellar albums in a row, culminating in one of this year’s very … END_OF_DOCUMENT_TOKEN_TO_BE_REPLACED