You are here: Home / Archives for Small Faces 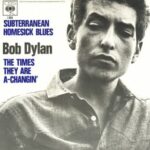 1964, On The Ed Sullivan Show,  the Dave Clark Five perform "Glad All Over." Comparing them to the Rolling Stones, Sullivan declares the Five "nice, neat boys." They would perform more times on his show than any other rock act. 1965, Bob Dylan’s single "Subterranean Homesick Blues" was released in the US. The lead track from his Bringing It All Back Home album, gave … END_OF_DOCUMENT_TOKEN_TO_BE_REPLACED

1964, The Rolling Stones made their second appearance on BBC TV show Top Of The Pops performing "Not Fade Away." 1965, This marked the first date of a 21 twice- nightly UK package tour with Del Shannon, Wayne Fontana & the Mindbenders, and Herman's Hermits, stopping at Sheffield's City Hall, England. 1967, Pink Floyd continued working on their debut album The Piper At … END_OF_DOCUMENT_TOKEN_TO_BE_REPLACED