You are here: Home / Archives for The Jam

1966, The Who begin the week  at The Palais in Ilford, Essex, England. Earlier in the day they record performances of "I'm A Boy" and "Heatwave" for British television's Ready, Steady, GO! 1968, Working at Abbey Road studios in London, The Beatles recoded overdubs onto the new George Harrison song "While My Guitar Gently Weeps." Eric Clapton added the guitar solo and became … END_OF_DOCUMENT_TOKEN_TO_BE_REPLACED 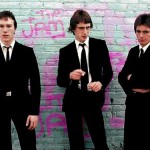 The Jam - The Gift By Andrew David James ... Soul is a strange old musical genre. Having fused jazz, blues and gospel, the finest examples of it are tremendous (for the uninitiated watch ‘Blues Brothers’ or listen to some Otis Redding) but then there is the rather turgid and hollow “white soul” that reared it’s ugly head in the 1970’s. David Bowie was probably a guilty … END_OF_DOCUMENT_TOKEN_TO_BE_REPLACED