You are here: Home / Archives for The Temptations

1964, The Animals kicked off their first headlining UK tour at the ABC in Manchester with Carl Perkins, Gene Vincent and The Nashville Teens supporting. 1964, Taking a day off from their British tour The Beatles go into the studio and complete the recording of six album tracks and the A-side of their next single, "I Feel Fine." They also complete "Eight Days a Week," "Kansas … END_OF_DOCUMENT_TOKEN_TO_BE_REPLACED

1965, The Byrds were forced to cancel a concert during their UK tour at The Guildhall, Portsmouth when only 250 of the 4,000 tickets had been sold. 1966, During a North American tour The Beatles played two shows at Maple Leaf Gardens, Toronto, Canada. The attendance for each show was 18,000. 1967, The Who's manager Kit Lambert was at Columbia Recording Studio in … END_OF_DOCUMENT_TOKEN_TO_BE_REPLACED 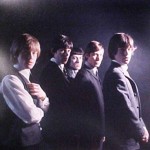 1964, The Beatles held the top five places on the US singles chart, with the fifth place - "Please Please Me," at number four, "I Want To Hold Your Hand," while at third was "Roll Over Beethoven." In the second position, "Love Me Do," and at the top spot, "Can't Buy Me Love." They also had another nine singles on the chart, bringing their total to fourteen singles on the Hot … END_OF_DOCUMENT_TOKEN_TO_BE_REPLACED

1964, Bob Dylan made his first entry on the UK charts with "The Times They Are A-Changin." 1965, Sam the Sham & the Pharaohs release their garage classic "Wooly Bully." 1966, Peter Tork opened a solo stint in Hollywood at The Troubadour. Tork had already auditioned for The Monkees, who he will join later in the year. 1967, Working on The Beatles Sgt Pepper album at … END_OF_DOCUMENT_TOKEN_TO_BE_REPLACED

1966, At a photo session with Bob Whitaker’s studio in London, The Beatles posed in white coats using sides of meat with mutilated and butchered dolls for the cover of their next American album, Yesterday and Today. After a public outcry, the album was pulled from stores and re-issued with a new cover. At the time, some of the Beatles defended the use of the Butcher photograph. … END_OF_DOCUMENT_TOKEN_TO_BE_REPLACED