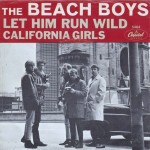 The A-side of today’s jukebox classic, “California Girls” has the greatest introduction to any record I have ever heard, and it’s a sound that slays me every time I hear it, even after all these years. It is indeed pure perfection from the pen of Brian Wilson. Brian Wilson: “I came up the introduction first. I’m still really proud of that introduction. It has a classical feel. I wrote the song ‘California Girls’ in the same key as the introduction. It took me some time. I wanted to write a song that had a traditional country and western left hand piano riff, like an old country song from the early ’50s. I wanted to get something that had kind of a jumpy feeling to it in the verses.” (Goldmine)

No matter how sublime that track is (and it totally is), it’s the single’s B-side that guaranteed it a slot in my jukebox. “Let Him Run Wild” is as close to perfection as it gets. Gossamer harmonies…incredible lyrics…music that superbly captures the mood of uncertainty. It’s hands down, one of their best recordings reflecting a simpler time for the band…and the world.

Under closer inspection, the seeds of Pet Sounds were sown on the two previous Beach Boys album, Beach Boys Today! and Summer Days (And Summer Nights!!), where both of today’s jukebox classics were culled from, showing glimmers of the new mature sound and making those two platters every bit as potent and, dare I say it, as good as the coveted masterpiece that followed.

Beach Boys Today! was still pretty much steeped in that good old Beach Boys sound, especially on songs like “Do You Wanna Dance,” “Dance Dance Dance,” “I’m So Young” and “Help Me, Rhonda.” These songs reflected the feelings of teenage innocence that put the band on the map in the first place.

This can be heard in session tapes for “Help Me, Rhonda” (on the bootleg recording called Capitol Punishment) where Murray can be heard constantly badgering and inserting his influence into the proceedings, much to the chagrin of the band and especially Brian. This was not a new occurrence for the group; they had to put up with Murray’s presence at their sessions since their inception. But during this session you can hear the members of the group cracking wise behind Murray’s back about his suggestions.

Several of the songs on Beach Boys Today! (released in March of 1965) reflect a new mature sound, especially on the wondrous single “When I Grow Up (To Be A Man)” where Brian tackles his uncertainty about the future in the lyrics, while making it all seem easy with its tight intricate harmonies. You can also hear Wilson’s compositional sophistication in the arrangements of “In The Back Of My Mind” and “Don’t Hurt My Little Sister.” In the plaintive “Please Let Me Wonder,” the aforementioned feelings of ennui that began to underpin Wilson’s entire being are perfectly encapsulated.

The first half of the follow up album, Summer Days (And Summer Nights!!) (released in June of 1965), takes a giant step backwards with a clutch of songs that hearken back to the group’s more innocent sound including “Salt Lake City,” “The Girl From New York City,” “Amusement Parks U.S.A.” and “Then I Kissed Her.” And even though jubilance can be heard pouring forth from the record’s grooves the sounds on the flip side of the platter tell a completely different story.

The second side of the record acts as a fairly accurate precursor of what was to come the following year on Pet Sounds. By this point, The Beach Boys’ touring schedule was pretty much non-stop, and Brian felt intense pressure to come up with more hit singles and albums to meet the demands that Capitol Records put upon him. As a result, Wilson began having panic attacks on the road and found it harder and harder to deal with day to day life on the road.

You can hear the pressures of being an in-demand Beach Boy wreaking havoc on him in the songs themselves. Sure, the group was still singing about relationships and girls, but the complex arrangements and instrumentation pointed the group in a new, stylistically bold direction that they would take once Brian Wilson pulled himself off of the road and camped himself inside the studio. You can hear it in the overall feeling of depression and dread inherent in one of their all-time greatest tracks (and the flip of today’s jukebox classic), “Let Him Run Wild.”

“California Girls” climbed to #3 on the charts in 1965. The song’s inspiration came from an LSD trip of Brian Wilson’s. After initially feeling paranoid and running up to his room to hide, he came down and began to work on piano figure that runs through the song. Within an hour, he had the “East coast girls are hip” part of the song worked out. The following day, he and Mike Love finished writing the song together. (Beautiful Dreamer documentary via Wikipedia) The song was also Bruce Johnston’s first appearance on a Beach Boys record.

The song was very influential at the time and, most notably, The Beatles’ paid homage to it with their song “Back in the U.S.S.R.” from The White Album in 1968. McCartney came up with the idea for the song while in India studying Transcendental Meditation with the Maharishi Yogi with Mike Love, the rest of The Beatles, Mia Farrow and her sister Prudence (of “Dear Prudence” fame). Mike Love: “Paul came down to the breakfast table one morning saying, ‘Hey, Mike, listen to this.’ And he starts strumming and singing, ‘Back in the U.S.S.R.,’ the verses. And I said, ‘Well, Paul, what you ought to do is talk about the girls around Russia, Ukraine girls and then Georgia on my mind, and that kind of thing.’ Which he did.” (Songfacts)

David Lee Roth brought the song back to the #3 position on the pop charts propelled by a hedonistic MTV video that was played in heavy rotation in 1975.

Musicians on the track featured the best of The Wrecking Crew including Hal Blaine on drums, Frank Capp on vibraphone, Jerry Cole on guitar, Al de Lory on organ, Carol Kaye on bass, Leon Russell on piano, Billy Strange on tambourine, plus a whole slew of horn players.