You are here: Home / Music / Classic Rock / Vinyl Schminyl Radio Classic Deep Cut 11-15-12
A great song from the debut album from 10cc is up today. Please give it a spin. Probably haven’t heard this in a while. 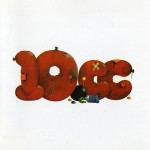 10cc are an English art rock band who achieved their greatest commercial success in the 1970s. The band initially consisted of four musicians—Graham Gouldman, Eric Stewart, Kevin Godley, and Lol Creme—who had written and recorded together for some three years, before assuming the “10cc” name in 1972.

For the most part, 10cc featured two strong songwriting teams, one ‘commercial’ and one ‘artistic’, but both teams injected sharp wit into lyrically dextrous and musically varied songs. Stewart and Gouldman were predominantly pop-song-writers, who created most of the band’s accessible songs. By way of contrast, Godley and Creme were the predominantly experimental half of 10cc, featuring an Art School sensibility and cinematic inspired writing.[1] Every member was a multi-instrumentalist, singer, writer and producer. Most of the band’s albums were recorded at their own Strawberry Studios (North) in Stockport and Strawberry Studios (South) in Dorking, with most of those engineered by Stewart.