This is a song  that kind of found me this weekend.  From the movie The Falcon And The Snowman by David Bowie. 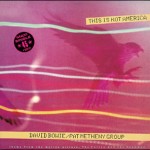 The Falcon and the Snowman is a 1985 film directed by John Schlesinger about two young American men, Christopher Boyce (played by Timothy Hutton) and Daulton Lee (played by Sean Penn), who sold U.S. security secrets to the Soviet Union. The film is based upon the 1979 book The Falcon and the Snowman: A True Story of Friendship and Espionage by Robert Lindsey, and features the song “This Is Not America“, written and performed by David Bowie and the Pat Metheny Group.