Here is a group that could be considered a one hit wonder..maybe a two hit wonder but I forgot the other one. Here is the one I didn’t forget by Cutting Crew. 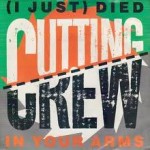 Vocalist Nick Van Eede founded the group along with Canadian guitarist Kevin MacMichael in 1985, and the two made demos that led to a recording contract, before bassist Colin Farley and drummer Martin Beadle joined in 1986.

Their first album, Broadcast, was released on Virgin Records in 1986. Although Virgin Records was already a major label in the UK, this song provided the first U.S. hit for Virgin as a full-fledged label. Virgin flew the band to New York City for initial recordings of the album, then to Australia to shoot music videos. The unknown band shot to #1 in the major US market, as well as smaller markets such as Canada and Norway, with their debut single, “(I Just) Died in Your Arms“. Their most popular single, it was a multiformat success in the US, where it also reached number four on the Hot Mainstream Rock Tracks chart, #24 on the Hot Adult Contemporary Tracks chart and —in an extended remix version— #37 on the Hot Dance/Club Play chart. The song peaked at #4 in another major market, the UK Singles Chart, as well as becoming a hit in the smaller Switzerland and South Africa markets. It went to #2 in Sweden and Ireland, and #9 in Austria.[1]