You are here: Home / Music / Classic Rock / Vinyl Schminyl Radio Classic Deep Cut 2-12-13
3 days ago was Carole King’s 71st birthday 2 days ago was the 42nd anniversary of the album Tapestry’s release…today for the first time we welcome her to the podcast with a great song from that album. 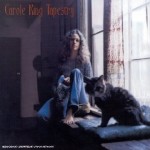 King wrote or co-wrote all of the songs on the album, several of which had already been hits for other artists such as Aretha Franklin‘s “(You Make Me Feel Like) A Natural Woman” (in 1967) and The Shirelles‘ “Will You Love Me Tomorrow” (in 1960). Three songs were co-written with King’s ex-husband Gerry Goffin. James Taylor, who encouraged King to sing her own songs, and who also played on Tapestry, would have a #1 hit with “You’ve Got a Friend.” Two songs were co-written with Toni Stern: “It’s Too Late” and “Where You Lead”.