This week we visit 5 American towns with our songs. Today we start in Memphis with one from Marc Cohn. 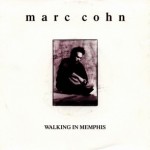 Cohn was born in Cleveland, Ohio. He graduated from Beachwood High School in Beachwood, a Cleveland suburb. He then attended Oberlin College.

Cohn is married to ABC News journalist Elizabeth Vargas, whom he met at the 1999 U.S. Open after being introduced by Andre Agassi.[1] They have two sons: Zachary Raphael, who was born on January 31, 2003, and Samuel Wyatt, who was born on August 16, 2006. Cohn has two other children from a previous marriage, a son, Max and a daughter, Emily.

On August 7, 2005, Cohn was shot in the head during an attempted carjacking in Denver, Colorado, following a concert with Suzanne Vega. The bullet struck him in the temple but did not penetrate his skull. Cohn was hospitalized and released the next day. His remaining concerts on the tour were canceled.