Today we finish our trip around America and go down to a little town in Texas. It’s from the”other” brothers…The Doobie Brothers. Have a great weekend all! Click to play! 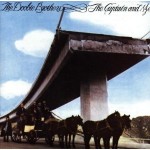 Drummer John Hartman arrived in California in 1969 determined to meet Skip Spence of Moby Grape and join an aborted Grape reunion. Spence introduced Hartman to singer, guitarist and songwriter Tom Johnston and the two proceeded to form the nucleus of what would become The Doobie Brothers. Johnston and Hartman called their fledgling group “Pud,” and experimented with lineups (occasionally including Spence) and styles as they performed in and around San Jose. They were mostly a power trio (along with bassist Greg Murphy) but briefly worked with a horn section.

In 1970, they teamed up with bass player Dave Shogren and singer, guitarist and songwriter Patrick Simmons. Simmons, who had belonged to several area groups (among them “Scratch”, an acoustic trio with future Doobies bassist Tiran Porter) and also performed as a solo artist, was already an accomplished fingerstyle player whose approach to the instrument complemented Johnston’s rhythmic R&B strumming.

In a recent interview, Johnston attributed the band’s eventual name to friend and housemate Keith “Dyno” Rosen, who noted the guys’ fondness for “doobies” (slang for marijuana cigarettes).[4] They considered the new moniker an improvement over Pud.[citation needed]

The Doobie Brothers improved their playing by performing live all over Northern California in 1970. They attracted a particularly strong following among local chapters of the Hells Angels and got a recurring gig at one of the bikers’ favorite venues, the Chateau Liberté in the Santa Cruz Mountains, and they continued playing the Chateau through the summer of 1975 (although these concerts did not include all band members, and they were unannounced and of a completely impromptu nature). An energetic set of demos (eight of which were briefly and illegally released on Pickwick Records in 1980 under the title Introducing the Doobie Brothers, and have since been bootlegged on CD under that title and On Our Way Up as well, both with expanded song selections), showcased fuzz-toned dual lead electric guitars, three-part harmonies and Hartman’s frenetic drumming and earned the rock group a contract at Warner Bros. Records.

At this point in their history, the band’s image reflected that of their biggest fans—leather jackets and motorcycles. However, the group’s 1971 self-titled debut album departed significantly from that image and their live sound of the period. The album, which failed to chart, emphasized acoustic guitars and frequently reflected country influences. The bouncy lead-off song “Nobody”, the band’s first single, has surfaced in their live set several times over the ensuing decades. Most recently, this song was rerecorded and added to their 2010 CD World Gone Crazy.

The following year’s second album, Toulouse Street (which spawned the hits and classic rock staples, “Listen to the Music” and “Jesus Is Just Alright“), brought the band their breakthrough success. In collaboration with manager Bruce Cohn, producer Ted Templeman and engineer Donn Landee, the band put forward a more polished and eclectic set of songs. They also made a change to the lineup, supplementing Hartman’s drumming with that of Navy veteran Michael Hossack while still touring behind their first album (a concert from June 14, 1971 at Fillmore West bears this out as it has this short-lived lineup). Also, the band recorded several songs on the second album with Shogren on bass, guitar & background vocals. But during the album’s recording, Shogren left after disagreements with producer Templeman. Shogren was replaced with singer, songwriter and bass guitarist Tiran Porter. Porter and Hossack were both stalwarts of the northern California music scene, Porter having previously played in Scratch with Simmons. Porter brought a funkier bass style to the band and added his husky baritone to the voices of Johnston and Simmons, resulting in a rich three-part harmonic vocal blend. Pianist Bill Payne of Little Feat contributed keyboards for the first time, beginning a decades-long collaboration that included many recording sessions and even a two-week stint touring with the band in 1974.[5] With an improved rhythm section and the songwriting of Johnston and Simmons, the Doobies’ trademark sound – an amalgam of R&B, country, bluegrass, hard rock, roadhouse boogie, funk and rock and roll – emerged fully formed.