This week we feature the girls. Some curious choices to be sure but today’s song I also liked a lot..she calls it a “hairbrush song”..a song that girls stand in front of a mirror singing…Introducing Nelly Furtado to the podcast. Click the album cover to play. 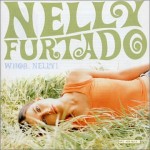 Furtado first gained fame with her debut album, Whoa, Nelly!, and its single “I’m Like a Bird“, which won a 2001 Juno Award for Single of the Year and a 2002 Grammy Award for Best Female Pop Vocal Performance. It produced two more international singles: the more successful “Turn off the Light“, and “Shit on the Radio (Remember the Days)“. After giving birth to her daughter Nevis, her second studio album, Folklore, was released. It was less commercially successful in the US. It produced three international singles: “Powerless (Say What You Want)“, “Try“, and “Força” (the theme of the 2004 European Football Championship).

In summer 2006, she released her third studio album, Loose. It is her biggest success to date worldwide. It produced the number-one hits “Promiscuous“, “Maneater“, “Say It Right” and “All Good Things (Come to an End)“. After a three-year break, in September 2009, she released her first full-length Spanish album, Mi Plan, along with her first Spanish single “Manos al Aire“, which topped the Billboard Hot Latin Songs. This made Furtado the first North American singer to top the Billboard Hot Latin Chart with an original Spanish song. Further singles released were “Más” and “Bajo Otra Luz“. For Mi Plan, Nelly received the Latin Grammy for Best Female Pop Vocal Album. On October 26, a remix album, Mi Plan Remixes, was released. Furtado released her first greatest hits album, The Best of Nelly Furtado, one month later on November 12, 2010. A new album, T.S.I., is scheduled for a summer 2012 release.