We lost a legend last month in Etta James and today we feature a great tune by her covered by many.  Please click the pic to play. 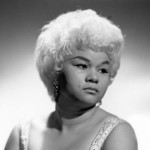 Etta James (born Jamesetta Hawkins; January 25, 1938 – January 20, 2012) was an American singer whose style spanned a variety of music genres including blues, rhythm and blues, rock and roll, soul, gospel and jazz. Starting her career in the mid-1950s, she gained fame with hits such as “Dance With Me, Henry“, “At Last“, “Tell Mama“, and “I’d Rather Go Blind” for which she claimed she wrote the lyrics.[1] She faced a number of personal problems, including drug addiction, before making a musical resurgence in the late 1980s with the album The Seven Year Itch.