It was 48 years ago today that my life and millions of others changed with the arrival of the Beatles on The Ed Sullivan Show. Here is the last song they played on the first night of The British Invasion. Click the pic to play.

“I Want to Hold Your Hand” was the band’s first number-one hit on the Billboard Hot 100 chart, starting the British Invasion of the American music charts. The song entered the chart on 18 January 1964 at number 45; by 1 February, it held the number one spot — for seven weeks — and ended up charting for 15 weeks.[3] It also held the top spot in the British charts. A million copies of the single had already been ordered on its release. “I Want to Hold Your Hand” became the Beatles’ best-selling single worldwide 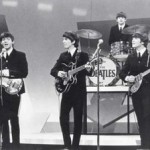