Went over to the Ravinia Music Festival to do our show today. It starts up in just a few short months. Sarah McLachlan makes her debut there in June. Let’s take a listen to one of her great songs today. 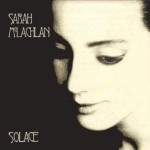 Sarah McLachlan was born on January 28, 1968, and adopted in Halifax, Nova Scotia, Canada. As a child, she took voice lessons, along with studies in classical piano and guitar. When she was 17 years old and still a student at Queen Elizabeth High School, she fronted a short-lived rock band called The October Game. One of the band’s songs, “Grind”, credited as a group composition, can be found on the independent Flamingo Records release Out of the Fog and the CD Out of the Fog Too. It has yet to be released elsewhere. Her high school yearbook predicted that she was “destined to become a famous rock star.”

Following The October Game’s first concert at Dalhousie University opening for Moev, McLachlan was offered a recording contract with Vancouver-based independent record label Nettwerk by Moev’s Mark Jowett. McLachlan’s parents insisted she finish high school and complete one year of studies at the Nova Scotia College of Art and Design before moving to Vancouver and embarking on a new life as a recording artist, and McLachlan finally signed to Nettwerk two years later before having written a single song.

In 1994 McLachlan became the target of a lawsuit, when she was sued by Uwe Vandrei, an obsessed fan from Ottawa, who alleged that his letters to her had been the basis of the single “Possession.” The lawsuit was also challenging for the Canadian legal system—Vandrei was a self-admitted stalker whose self-acknowledged goal in filing the lawsuit was to be near McLachlan physically. Consequently, special precautions were planned to ensure McLachlan’s safety if at any time she had to be in the same location as Vandrei. The lawsuit never came to trial, however, as Vandrei was found dead in an apparent suicide before the trial began. This topic was explored at length in Canadian author Judith Fitzgerald‘s book, Building a Mystery: The Story of Sarah McLachlan & Lilith Fair.