Seal makes his debut on the podcast today with a great song from his debut album. 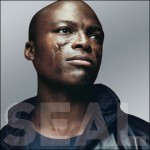 Seal Henry Olusegun Olumide Adeola Samuel (born 19 February 1963 in Paddington, London, England), popularly known simply as Seal, is a British soul and R&B singer-songwriter, of Nigerian and Brazilian background.[1] Seal has won numerous music awards throughout his career, including three Brit Awards—winning Best British Male in 1992, four Grammy Awards, and an MTV Video Music Award.[2][3] Seal is known for his numerous international hits; the best known being “Kiss from a Rose“, which appeared in the soundtrack to the 1995 film Batman Forever. He has sold more than 20 million albums worldwide