This week we are featuring last songs on some great Classic Rock albums. I pulled out this gem from the Rolling Stones from their album It’s Only Rock And Roll. Been a long time since I’ve heard this one! Click the cover to play. 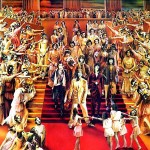 It’s Only Rock ‘n Roll is the twelfth British and fourteenth American studio album by The Rolling Stones, released in 1974. It would be the last Rolling Stones album for guitarist Mick Taylor and the songwriting and recording of the album’s title track would have a connection to Taylor’s eventual replacement, Ronnie Wood. The album has a more firm rock sound than the band’s previous album, the more funk and soul-inspired Goats Head Soup. The album reached #1 in the US and #2 in the UK.