Our last “Last track” this week belongs to Elton John from his great album Tumbleweed Connection. Please give it a listen today. Next week’s songs will be about time. Have a great weekend!! 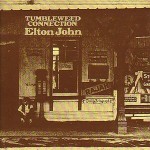 Sir Elton Hercules John, CBE (born Reginald Kenneth Dwight on 25 March 1947) is an English rock singer-songwriter, composer, pianist and occasional actor. He has worked with lyricist Bernie Taupin as his songwriter partner since 1967; they have collaborated on more than 30 albums to date.

In his four-decade career John has sold more than 250 million records, making him one of the most successful artists of all time.[1] His single “Candle in the Wind 1997” has sold over 33 million copies worldwide, and is the best selling single in Billboard history.[2] He has more than 50 Top 40 hits, including seven consecutive No. 1 US albums, 56 Top 40 singles, 16 Top 10, four No. 2 hits, and nine No. 1 hits. He has won six Grammy Awards, four Brit Awards, an Academy Award, a Golden Globe Award and a Tony Award. In 2004, Rolling Stone ranked him Number 49 on its list of the 100 greatest artists of all time.[3]

John was inducted into the Rock and Roll Hall of Fame in 1994.[4] Having been named a Commander of the Order of the British Empire in 1996, John received a knighthood from Queen Elizabeth II for “services to music and charitable services” in 1998.[5]

He has been heavily involved in the fight against AIDS since the late 1980s.[6] In 1992, he established the Elton John AIDS Foundation and a year later began hosting the annual Academy Award Party, which has since become one of the most high-profile Oscar parties in the Hollywood film industry. Since its inception, the foundation has raised over $200 million.

John entered into a civil partnership with David Furnish[7] on 21 December 2005 and continues to be a champion for LGBT social movements. In 2008, Billboard magazine ranked him as the most successful male solo artist on “The Billboard Hot 100 Top All-Time Artists” (third overall, behind only The Beatles and Madonna).[8]