The songs are talking about time this week and if you have a couple of minutes please listen to this Blue Eyed Soul one from the Doobie Brothers. 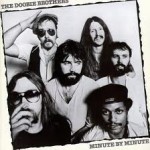 Drummer John Hartman arrived in California in 1969 determined to meet Skip Spence of Moby Grape and join an aborted Grape reunion. Spence introduced Hartman to singer, guitarist and songwriter Tom Johnston and the two proceeded to form the nucleus of what would become The Doobie Brothers. Johnston and Hartman called their fledgling group “Pud” and experimented with lineups (occasionally including Spence) and styles as they performed in and around San Jose. They were mostly a power trio (along with bassist Greg Murphy) but briefly worked with a horn section.

In 1970 they teamed up with bass player Dave Shogren and singer, guitarist and songwriter Patrick Simmons. Simmons, who had belonged to several area groups (among them “Scratch”, an acoustic trio with future Doobies bassist Tiran Porter) and also performed as a solo artist, was already an accomplished fingerstyle player whose approach to the instrument complemented Johnston’s rhythmic R&B strumming.

In a recent interview[when?], Johnston attributed the band’s eventual name to friend and housemate Keith “Dyno” Rosen, who noted the guys’ fondness for “doobies” (slang for marijuana cigarettes).[4] They considered the new moniker an improvement over Pud.[citation needed]

The Doobie Brothers improved their playing by performing live all over Northern California in 1970. They attracted a particularly strong following among local chapters of the Hells Angels and got a recurring gig at one of the bikers’ favorite venues, the Chateau Liberté in the Santa Cruz Mountains, and they continued playing the Chateau through the summer of 1975 (although these concerts did not include all band members, and they were unannounced and of a completely impromptu nature). An energetic set of demos (eight of which were briefly and illegally released on Pickwick Records in 1980 under the title Introducing the Doobie Brothers, and have since been bootlegged on CD under that title and On Our Way Up as well, both with expanded song selections), showcased fuzz-toned dual lead electric guitars, three-part harmonies and Hartman’s frenetic drumming and earned the rock group a contract at Warner Bros. Records.

At this point in their history, the band’s image reflected that of their biggest fans—leather jackets and motorcycles. However, the group’s 1971 self-titled debut album departed significantly from that image and their live sound of the period. The album, which failed to chart, emphasized acoustic guitars and frequently reflected country influences. The bouncy lead-off song “Nobody”, the band’s first single, has surfaced in their live set several times over the ensuing decades. Most recently, this song was rerecorded and added to their 2010 CD World Gone Crazy.

The following year’s second album, Toulouse Street (which spawned the hits and classic rock staples, “Listen to the Music” and “Jesus Is Just Alright“), brought the band their breakthrough success. In collaboration with manager Bruce Cohn, producer Ted Templeman and engineer Donn Landee, the band put forward a more polished and eclectic set of songs. They also made a change to the lineup, supplementing Hartman’s drumming with that of Navy veteran Michael Hossack while still touring behind their first album (a concert from June 14, 1971 at Fillmore West bears this out as it has this short-lived lineup with Hossack and Shogren). Also, the band recorded several songs on the second album with Shogren on bass, guitar & background vocals. But during the album’s recording, Shogren left after disagreements with producer Templeman. Shogren was replaced with singer, songwriter and bass guitarist Tiran Porter. Porter and Hossack were both stalwarts of the northern California music scene, Porter having previously played in Scratch with Simmons. Porter brought a funkier bass style to the band and added his husky baritone to the voices of Johnston and Simmons, resulting in a rich three-part harmonic vocal blend. Pianist Bill Payne of Little Feat contributed keyboards for the first time, beginning a decades-long collaboration that included many recording sessions and even a two-week stint touring with the band in 1974.[5] With an improved rhythm section and the songwriting of Johnston and Simmons, the Doobies’ trademark sound – an amalgam of R&B, country, bluegrass, hard rock, roadhouse boogie, funk and rock and roll – emerged fully formed.

A string of hits followed, including Johnston’s “Long Train Runnin’” and “China Grove“, from the 1973 album The Captain and Me. Other noteworthy songs on the album were Simmons’ country-ish ode “South City Midnight Lady” and the explosive, hard rocking raveup, “Without You”, for which the entire band received songwriting credit. Onstage, the latter song would sometimes stretch into a 15-minute jam with additional lyrics ad-libbed by Johnston. A 1973 appearance on the debut episode of the television music variety show Don Kirshner’s Rock Concert featured one such epic performance of the tune.

In the midst of recording sessions for their next album, 1974’s What Were Once Vices Are Now Habits, Hossack abruptly departed the band, citing burnout from constant touring. Drummer, songwriter and vocalist Keith Knudsen (who previously drummed for Lee Michaels of “Do You Know What I Mean” fame) was recruited promptly, and left with the Doobies on a major tour within days of joining in September 1973. (Hossack subsequently replaced Knudsen in the band Bonaroo, which served as an opening act for the Doobies shortly thereafter.) Both Hossack’s drums and Knudsen’s voice are heard on Vices.

In 1974 Steely Dan co-lead guitarist Jeff “Skunk” Baxter learned that his band was retiring from the road and that Donald Fagen and Walter Becker intended to work almost exclusively with session players in the future. In need of a steady gig, he segued into the Doobie Brothers as third lead guitarist in the middle of their current tour. He had previously worked with the band in the studio, adding pedal steel guitar to both Captain (“South City Midnight Lady”) and Vices (“Black Water“, “Tell Me What You Want”) and had already been playing with the band as a “special guest” during that year’s tour.

Vices included the band’s first No. 1 single: Simmons’ signature tune “Black Water“, which featured the memorable refrain, “I’d like to hear some funky Dixieland, pretty mama come and take me by the hand”; climbed to the top of the charts in March 1975; and eventually propelled the album to multi-platinum status. Johnston’s lyrical “Another Park, Another Sunday” (as a single, it featured “Black Water” as the B-side) and his horn-driven funk song “Eyes of Silver” had also charted at numbers 32 & 52, respectively, the previous year.

During this period and for several subsequent tours, the Doobies were often supported on-stage by Stax Records legends The Memphis Horns. Live recordings with the horn section have aired on radio on the King Biscuit Flower Hour, though none have been officially released. They also appeared as session players on multiple Doobies albums.

By the end of 1974, Johnston’s health was suffering from the rigors of the road. He was absent when the band joined the Beach Boys, Chicago and Olivia Newton-John on “Dick Clark‘s New Year’s Rockin’ Eve” that December. By then, the western-themed Stampede had been completed for release in 1975. It featured yet another hit single, Johnston’s cover of the Holland-Dozier-Holland-written Motown hit “Take Me in Your Arms” (originally sung by Kim Weston and also covered by the Isley Brothers and Blood Sweat and Tears). The song included a distinctive Baxter guitar solo. Simmons contributed the atmospheric “I Cheat the Hangman,” as well as “Neal’s Fandango,” an ode to Santa Cruz, Jack Kerouac and Neal Cassady. Ry Cooder added his slinky slide guitar to Johnston’s cowboy song, “Rainy Day Crossroad Blues”.

By the start of the Spring 1975 promotional tour for Stampede, Johnston’s condition was so precarious that he required emergency hospitalization for a bleeding ulcer. With Johnston convalescing and the tour already underway, Baxter proposed recruiting a fellow Steely Dan alum to fill the hole: singer, songwriter and keyboardist Michael McDonald. Simmons, Knudsen, Porter and McDonald divvied up and sang Johnston’s parts on tour while Simmons and Baxter shared lead guitar chores.[6][7]

Under contract to release another album in 1976, the Doobies were at a crossroads. Their primary songwriter and singer remained unavailable, so they turned to McDonald and Porter for material to supplement that of Simmons. The resulting LP, Takin’ It to the Streets, debuted a radical change in their sound. Their electric-guitar-based rock and roll gave way to a more soft rock and blue-eyed soul sound, emphasizing keyboards and horns and subtler, more syncopated rhythms. Baxter contributed jazz-inflected guitar stylings reminiscent of Steely Dan (as he had played with that group), along with more emphasis on compound chords and unusual, complex chords and sophisticated progressions with key changes and longer, more developed melody lines. Above all, McDonald’s voice became the band’s new signature sound. Takin’ It to the Streets featured McDonald’s title track and “It Keeps You Runnin’,” both hits. (“It Keeps You Runnin'” would be covered by Carly Simon, appearing on her album Another Passenger, with the Doobies backing her.) Bassist Porter wrote and sang a tribute to the absent Johnston, entitled “For Someone Special.” A greatest hits compilation, Best of the Doobies, followed before year’s end. In 1996, the Recording Industry Association of America certified Best of the Doobies “Diamond” for sales in excess of 10 million units.

Their new sound was further refined and McDonald’s dominant role cemented with 1977’s Livin’ on the Fault Line. It featured a cover of the Motown classic “Little Darling (I Need You)“, “Echoes Of Love” (written for, but not recorded by, Al Green by James Mitchell, then of the Memphis Horns, and Earl Randle, both of whom had worked with Green a good bit, to which Simmons added some music and lyrics co-writing the finished version with Mitchell and Randle; the song was later covered by the Pointer Sisters and ex-New Seekers vocalist Lyn Paul), and “You Belong To Me” (co-written by McDonald and Carly Simon, who had a hit with her own version of the tune). To help promote Fault Line, the band performed live on the PBS show Soundstage. Jeff Baxter used an early type of guitar synthesizer (made by Roland) on many of the tracks (it is heavily featured in his solo on the title track, as well as on “Chinatown”). The combination of McDonald’s cerebral approach to harmony, funkier beats and R&B vocal flavor, along with Baxter’s guitar pyrotechnics, pushed the band away from the more proletarian biker-bong-boogie style that made them popular originally. Fortuitously, however, the new sound made them a crossover pop-R&B-rock sensation, bringing them even more fans and chart presence. The use of complex jazz chords, built on McDonald’s thoroughly composed keyboard parts, tempered by strong pop hooks, resulted in an album that, though not really jazz, had a distinctly urban contemporary finish, adding the flavor of the “cool jazz” era to a pop setting.