We are going all the way back to 2012 today with a great song from Mumford and Sons! 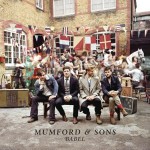 Mumford & Sons recorded an EP, Love Your Ground, and performed in small to moderate venues in the UK and the United States to expose audiences to their music and build support for an eventual album. Their debut album, Sigh No More, was released in the UK and Ireland in October 2009, and February 2010 in the US. The album reached number one in Ireland, Australia and New Zealand, and eventually peaked at number two on the UK Albums Chart and the Billboard 200 in the US. The band gained popularity throughout 2010, performing for larger audiences and making their first network television appearances in the US. On 1 December 2010, the band received two Grammy Award nominations, one for Best New Artist and the other for Best Rock Song (“Little Lion Man“). The ensuing live performance at the Grammy ceremony in February 2011 led to increased airplay and popularity for singles from Sigh No More. The band won the ARIA Music Award for Most Popular International Artist in 2010, and the Brit Award in 2011 for Best British Album.

The band’s second studio album Babel was released in September 2012.[1] The album debuted at number one in the UK and US, becoming the fastest selling album of 2012 in the UK, and the second-biggest selling debut in 2012 in the US.[2][3] At the 2013 Grammy Awards, they sang “I Will Wait” and Babel won the Grammy Award for Album of the Year. In 2013 the band won a Brit Award for Best British Group.