Today we have a pyromaniac concert goers dream..except today’s version is by Guns And Roses. Pretty cool cover by them! 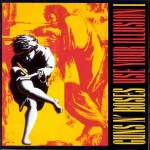