Good morning..It’s Monday everyone and now time for a brand new Classic Deep Cut..They make their debut on the podcast..here’s Cheap Trick. 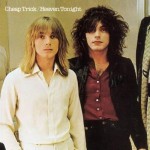 Cheap Trick is an American rock band from Rockford, Illinois, formed in 1973. The band consists of Robin Zander (vocals, rhythm guitar), Rick Nielsen (lead guitar), Tom Petersson (bass guitar), and Bun E. Carlos (drums). Their biggest hits include “Surrender“, “I Want You to Want Me“, “Dream Police” and “The Flame“.

They have often been referred to in the Japanese press as the “American Beatles”.[1] In October 2007, the Illinois Senate passed a resolution designating April 1 as Cheap Trick Day in the state.[2] The band was also ranked #25 in VH1‘s list of the 100 Greatest Artists of Hard Rock.[3]