Today is tuna day on the podcast. Hot Tuna that is with a great acoustic number for you! 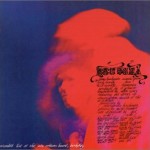 Hot Tuna began during a hiatus in Jefferson Airplane‘s touring schedule in early 1969 while Grace Slick was undergoing recovery from throat node surgery that had left her unable to perform. Jorma Kaukonen, Jack Casady, Paul Kantner, and new drummer Joey Covington played several shows around San Francisco including the Airplane’s original club, The Matrix before Jefferson Airplane returned to performing in April to support the album Volunteers. Although Covington had been hired as Jefferson Airplane’s drummer, Spencer Dryden continued to perform with the Airplane and Covington was only called when needed.[2] Their early repertoire was derived mainly from Airplane material that Jorma played and covers of American country and blues artists such as Rev. Gary Davis, Jelly Roll Morton, Bo Carter and Arthur Blake (Blind Blake). In addition to these shows, Jack & Jorma would play as a duo with Jorma on acoustic guitar. In September, 1969, the week of concerts performed at New Orleans House in Berkeley was recorded and released as a live album in 1970, Hot Tuna. This album is affectionately known by Tunaphiles as the “breaking glass album”, because of the sound of breaking beer glasses during the recording of “Uncle Sam Blues”.[3] Jorma’s brother Peter Kaukonen soon replaced Paul on rhythm guitar and Marty Balin joined on vocals for the electric songs. Starting in October 1969, Hot Tuna would perform as opening act to Jefferson Airplane with a combination of both electric and acoustic sets, giving Kaukonen and Casady an opportunity to explore their love of traditional blues music, and also giving Balin and Covington a chance to explore soul-rock compositions. In 1970, RCA paid for the band to go to Jamaica to record their next album, now with Paul Ziegler taking over Peter’s spot, but the album was never finished.[2] Papa John Creach was brought in to the band in late 1970 (Creach also joined Jefferson Airplane at the same time) and Jefferson Airplane and Hot Tuna finished their co-tour in November 1970 with shows at the Fillmore East.

In September 1970, Hot Tuna performed two acoustic shows without Jefferson Airplane at Pepperland and received good reviews[2] signifying that Hot Tuna could survive without the other band to support it. As Jefferson Airplane wound down and stopped touring after the Fillmore East shows, Hot Tuna—for whom live performance was always of prime importance—became an independent group consisting of Jorma, Jack, new drummer Sammy Piazza, and Papa John, moving fully to the electric band format. This line-up was documented on the album First Pull Up, Then Pull Down (1971), recorded live at the Chateau Liberte (a nondescript club favored by the band) near Santa Cruz, California. The studio albums Burgers (1972) and The Phosphorescent Rat (1973) followed, with Papa John leaving before Rat was recorded. These two albums featured compositions mainly of Kaukonen original material and included some of the guitarist’s most delicate and poetic works. David Crosby sang supporting vocals on the Burgers track “Highway Song,” and keyboard player Nick Buck made his first appearance on what would become a semi permanent tenure during the 1970s. As the band prepared for its 1974 tour in support of Rat, Jorma decided to have the band perform acoustic on the next tour and Piazza was let go.[2] Jorma and Jack then proceeded to record Jorma’s first solo album, Quah.