This week is disco week..not disco songs but songs by classic artists that kind of touched the disco era from 1975-79. Today we have Boz Scaggs from his great 1976 album Silk Degrees. His players on this album eventually became the band Toto. Check it out please. Great back story here. 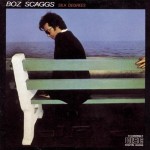 Silk Degrees is the seventh album by Boz Scaggs, released on the Columbia Records label in 1976. The album reached #2 on the U.S. pop albums chart.

The album marked Scaggs’ commercial zenith, mainly spearheaded by the R&B/Soul hit “Lowdown”. The album is a mix of straight pop rock tracks (“Jump Street” and “Lido Shuffle”), smooth soul compositions (“What Can I Say” and “Lowdown”) and appealing ballads (“Harbor Lights” and “We’re All Alone“; the latter was later a hit for Rita Coolidge).

“Lowdown” reached the top 5 on the club play, black, disco and pop charts and also did respectably on the AC chart, with its peak at #3 on the pop chart. The song is an airplay staple to this day, particularly on AC, oldies and smooth jazz radio stations. “It’s Over”, “What Can I Say” and “Lido Shuffle” reached #38, #42 and #11, respectively, on the pop chart. The album was recorded at Davlen Sound Studios and Hollywood Sound Studios, Los Angeles. Among the accompanying musicians, David Paich, Jeff Porcaro, Steve Porcaro, and David Hungate would go on to form the band Toto.

Ultimately, “Lowdown” earned a Grammy Award, as the Best R&B Song at the Grammy Awards of 1976. Scaggs also received Grammy nominations for Album of the Year, Best LP Package, Best Pop Vocal by a Male and Best R&B Vocal Performance by a Male for “Lowdown”.