We have an “L” of a song today by The Who…from their second rock opera..It starts with the letter L. Check it out please. 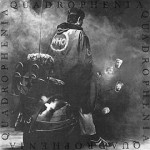 Quadrophenia is the sixth studio album by English rock band The Who. Released on 19 October 1973 by Track and Polydor in the United Kingdom, and Track and MCA in the United States, it is a double album, and the group’s second rock opera. Its story involves social, musical and psychological happenings from an English teenage perspective, set in London and Brighton in 1964 and ’65.

The name is a variation on the popular usage of the medical diagnostic term schizophrenia as dissociative identity disorder to reflect the four distinct personalities of Jimmy, the opera’s protagonist – each said to represent the personality of one member of The Who. At the same time, the title is a play on the term quadraphonic sound, then a recent invention. Composer Pete Townshend has said: “The whole conception of Quadrophenia was geared to quadraphonic, but in a creative sort of way. I mean I wanted themes to sort of emerge from corners. So you start to get the sense of the fourness being literally speaker for speaker.” [1]