I am in the mood for a nice cold drink this morning. How about Green River? It’s our Classic Deep Cut today from CCR. 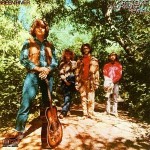 Creedence Clearwater Revival (sometimes shortened to Creedence or CCR) was an American rock band that gained popularity in the late 1960s and early 1970s.

Creedence Clearwater Revival’s music is still a staple of American and worldwide radio airplay[1] and often figures in various media. The band has sold 26 million albums in the United States alone.[2] Creedence Clearwater Revival was immortalized when they were inducted into the Rock and Roll Hall of Fame in 1993.[3] They were ranked at 82 on Rolling Stone‘s list of the 100 greatest artists of all time.[4]