Not one of their most commercially successful albums but it is their second one..the one before they became superstars. The title track from Time and A Word by Yes. 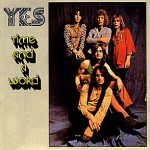 Yes are an English rock band who achieved worldwide success with their progressive, art, and symphonic style of rock music. Regarded as one of the pioneers of the progressive genre, Yes are known for their lengthy songs, mystical lyrics, elaborate album art, and live stage sets. No fewer than 17 musicians have been a part of the band’s line-up, with its current form comprising singer Jon Davison, bassist Chris Squire, guitarist Steve Howe, drummer Alan White, and keyboardist Geoff Downes. Yes have sold 13.5 million certified units in the United States.[1]

Formed in 1968 by Squire and singer Jon Anderson, the first line-up also included guitarist Peter Banks, keyboardist Tony Kaye and drummer Bill Bruford, who released two albums together to lukewarm reception and sales. Yes began to enjoy success after the release of The Yes Album (1971) and Fragile (1971), which featured new arrivals Howe and Rick Wakeman. They achieved further success with Close to the Edge (1972) and Tales from Topographic Oceans (1973), the latter of which featured White on drums. Wakeman was replaced by Patrick Moraz, who played on Relayer (1974). Wakeman returned on Going for the One (1977) and Tormato (1978). Anderson and Wakeman left the group due to musical differences amongst the band in 1980. Their replacements, Trevor Horn and Downes, featured on Drama (1980) and its supporting tour.

Yes reformed in 1982 after Squire and White were joined by the returning Anderson and Kaye, with the addition of guitarist Trevor Rabin. They adopted a pop rock sound and released the number one single “Owner of a Lonely Heart” and 90125 (1983), their best-selling album to date, followed by Big Generator (1987). Anderson left and co-formed the side project Anderson Bruford Wakeman Howe with the named members in 1989. Following a legal battle amongst both Yes groups, they formed an eight-man band to perform on Union (1991) and its supporting tour. Rabin and Kaye featured on Talk (1994) before leaving, while Wakeman and Howe returned with Keys to Ascension (1996) and Keys to Ascension 2 (1997). Wakeman was replaced by Igor Khoroshev, who featured on Open Your Eyes (1997) and The Ladder (1999) along with guitarist Billy Sherwood. The release of Magnification (2001) marked the first album since 1970 to feature an orchestra.

In 2002, Wakeman returned for the band’s 35th anniversary tour. The band ceased to tour in 2004, partly due to health concerns regarding Anderson and Wakeman. Following a hiatus, Yes re-started in 2008 with keyboardist Oliver Wakeman and singer Benoît David.[2][3] After of the release of Fly from Here (2011) the band recruited Jon Davison, lead singer of Glass Hammer, a progressive rock band from Chattanooga, Tennessee, to replace David.[4][5] Yes continue to perform to this day, more than 40 years since their formation.[4][6]