A little “hump day” Spirit is in order today. A great song from their album The Family That Plays Together from 1968. Check it out! 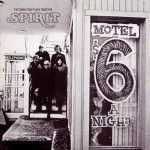 The original lineup of the group evolved from an earlier Los Angeles band, The Red Roosters, which included Randy California (guitars, vocals), Mark Andes (bass) and Jay Ferguson (vocals, percussion). With the addition of California’s stepfather Ed Cassidy (drums), and keyboard player John Locke the new band was originally named the Spirits Rebellious (after a book by Khalil Gibran) but was soon shortened simply to Spirit. Randy California had also played with Jimi Hendrix (then known as Jimmy James) in Jimmy James and the Blue Flames in 1966.

Cassidy was instantly recognizable by his shaven head (hence his nickname “Mr. Skin”) and his fondness for wearing black. He was around twenty years older than the rest of the group (born in 1923). His earlier career was primarily in jazz and included stints with Cannonball Adderley, Gerry Mulligan, Roland Kirk, Thelonious Monk and Lee Konitz. He was a founding member of Rising Sons with Taj Mahal and Ry Cooder.