Today we visit Jethro Tull’s second album Stand Up with a great song to bring you into the day. 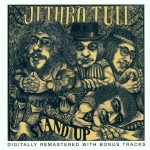 Their music is characterised by the vocals, acoustic guitar, and flute playing of Ian Anderson, who has led the band since its founding, and the guitar work of Martin Barre, who has been with the band since 1969, after he replaced Mick Abrahams.

One of the world’s best-selling music artists, the band have sold more than 60 million albums worldwide[1] in a career that has spanned more than forty years.

Ian Anderson’s first band started in 1962 in Blackpool and was known as The Blades. The group featured Anderson on vocals and harmonica, Jeffrey Hammond on bass, John Evans on keyboards, and a guitarist named either Hipgrave or Michael Stephans.[3] Drummer Barrie Barlow became a member in 1963 after Evans had switched from drums to piano.[4] By 1964 the band had developed into a seven-piece Blue-eyed soul band called The John Evan Band (later The John Evan Smash). By this point Evans had shortened his surname to “Evan” at the insistence of Hammond, who thought it sounded better and more unusual.

In 1967 the band moved to the London area, basing themselves in nearby Luton;[1] they also travelled to Liverpool. However, money remained short and within days of the move most of the band quit and headed back north, leaving Anderson and bassist Glenn Cornick (who had replaced Hammond) to join forces with blues guitarist Mick Abrahams and his friend, drummer Clive Bunker, both from the Luton-based band McGregor’s Engine.[5] At first, the new band had trouble getting repeat bookings and they took to changing their name frequently to continue playing the London club circuit. Band names were often supplied by their booking agents’ staff, one of whom, a history enthusiast, eventually christened them “Jethro Tull” after the 18th-century agriculturist. The name stuck because they happened to be using it the first time a club manager liked their show enough to invite them to return.[6] They were signed to the blossoming Ellis-Wright agency, and became the third band managed by the soon-to-be Chrysalis empire. It was around this time that Anderson purchased a flute after becoming frustrated with his inability to play guitar like Eric Clapton.

Their first single was released in 1968, written by Abrahams and produced by Derek Lawrence, and called “Sunshine Day”; on the label the group’s name was misspelled “Jethro Toe”, making it a collector’s item.[7] “Sunshine Day” was unsuccessful.

They released their first album This Was in 1968.[1] In addition to music written by Anderson and Abrahams the album included the traditional “Cat’s Squirrel”, which highlighted Abrahams’ blues-rock style. The Rahsaan Roland Kirk-penned jazz piece “Serenade to a Cuckoo” gave Anderson a showcase for his growing talents on the flute, an instrument which he started learning to play only half a year before the release of the album.[citation needed] The overall sound of the group at this time was described in the Record Mirror by Anderson in 1968 as “a sort of progressive blues with a bit of jazz.”[8]

Following this album, Abrahams left after a falling out with Anderson and formed his own band, Blodwyn Pig.[1] There were a number of reasons for his departure: he was a blues purist, while Anderson wanted to branch out into other forms of music; Abrahams and Cornick did not get along; and Abrahams was unwilling to travel internationally or play more than three nights a week, while the others wanted to be successful by playing as often as possible and building an international fan base.[citation needed]

Guitarist Tony Iommi, from the group Earth (who would soon change their name to Black Sabbath), took on guitar duties for a short time after the departure of Abrahams, appearing in The Rolling Stones Rock and Roll Circus, in which the group (all but Ian’s vocals, which were recorded live) mimed “A Song For Jeffrey” in December 1968. Iommi returned to Earth thereafter. David O’List (who had just left the Nice) also deputised on guitar with Jethro Tull for a few shows and was briefly considered as a possible permanent replacement for Abrahams, although plans of O’List becoming a full fledged member of the band never materialised.[9]