One of my favorite songs EVER is being featured today. It’s by Marvin Gaye and it’s not even the title track to this album…It’s the last track. Please enjoy! Click the pic to play. 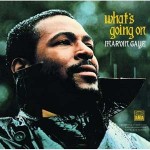 Starting his career as a member of the doo-wop group The Moonglows in the late 1950s, he ventured into a solo career after the group disbanded in 1960, signing with Motown Records subsidiary, Tamla. He started off as a session drummer, but later ranked as the label’s top-selling solo artist during the 1960s. He was crowned “The Prince of Motown”[3] and “The Prince of Soul”.[4] because of solo hits such as “How Sweet It Is (To Be Loved by You)“, “Ain’t That Peculiar“, “I Heard It Through the Grapevine,” and his duet singles with singers such as Mary Wells and Tammi Terrell.

His work in the early- and mid-1970s included the albums, What’s Going On, Let’s Get It On, and I Want You, which helped influence the quiet storm, urban adult contemporary, and slow jam genres. After a self-imposed European exile in the early 1980s, Gaye returned on the 1982 Grammy-Award winning hit, “Sexual Healing” and the Midnight Love album before his death.