The Stones are celebrating their half century mark and today we present to you what is their, arguably, most popular song. Give it a listen and hear the back story. 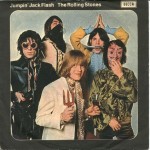 The Rolling Stones are an English rock band formed in London in 1962 and one of the most commercially successful and critically acclaimed acts in the history of popular music.[2][3] The group’s earliest line-up consisted of Brian Jones (guitar, harmonica), Ian Stewart (piano), Mick Jagger (lead vocals, harmonica), Keith Richards (guitar, vocals), Bill Wyman (bassist) and Charlie Watts (drummer). Since 1993, the band has consisted of Jagger, Richards, Watts and guitarist Ronnie Wood. In studio and live performances, Darryl Jones (bassist) and Chuck Leavell (keyboardist) also serve as a regular contributors. Inducted into the Rock and Roll Hall of Fame in 1989, the Rock Hall states; “critical acclaim and popular consensus has accorded them the title of the “World’s Greatest Rock and Roll Band.”[2] They were ranked number 4 in Rolling Stone magazine’s 100 Greatest Artists of All Time, and their worldwide sales are estimated at more than 200 million albums.[4][5]

First popular in Europe, The Rolling Stones quickly became successful in North America during the British Invasion of the mid 1960s. They have released twenty-two studio albums in the United Kingdom (24 in the United States), eleven live albums (twelve in the US), and numerous compilations.[6] Their album Sticky Fingers (1971) began a string of eight consecutive studio albums reaching number one in the United States. Their most recent album of new material, A Bigger Bang, was released in 2005. In 2008, Billboard magazine ranked the Rolling Stones at number ten on “The Billboard Top All-Time Artists“, and as the second most successful group in the Billboard Hot 100 chart.[7]

The emergence of The Rolling Stones has been credited for the greater international popularity of the primitive urban blues typified by Chess Records’ artists such as Muddy Waters, who wrote “Rollin’ Stone“, the song from which the band drew its name.[8] The Rolling Stones’ endurance and relevance, critic and musicologist Robert Palmer said, is due to their being “rooted in traditional verities, in rhythm-and-blues and soul music” while “more ephemeral pop fashions have come and gone”.[9]