The Marshall Tucker Band makes their debut on the podcast with the first single off their first album today. 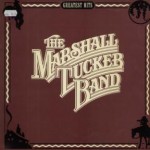 The Marshall Tucker Band is an American Southern rock band originally from Spartanburg, South Carolina. The band’s blend of rock, rhythm and blues, jazz, country, and gospel[1] helped establish the Southern rock genre in the early 1970s.[2] While the band had reached the height of its commercial success by the end of the decade, the band has recorded and performed continuously under various lineups for nearly 40 years.[2]

The original lineup of the Marshall Tucker Band, formed in 1972, included lead guitarist, vocalist, and primary songwriter Toy Caldwell (1947–1993), vocalist Doug Gray (b. 1948), keyboard player and flutist Jerry Eubanks (b. 1950), rhythm guitarist George McCorkle (1946–2007), drummer Paul Riddle (b. 1953), and bassist Tommy Caldwell (1949–1980). They signed with Capricorn Records and in 1973 released their first LP, The Marshall Tucker Band. After Tommy Caldwell was killed in an automobile accident in 1980, he was replaced by bassist Franklin Wilkie. Most of the original band members had left by the mid-1980s to pursue other projects.[3] The band’s lineup as of 2009 consists of Gray on vocals, guitarist Stuart Swanlund, keyboard player and flutist Marcus James Henderson, guitarist Rick Willis, bassist Pat Elwood, and drummer B.B. Borden.