This week we are featuring songs alphabetically A-E. We start off with one by Toto today that I haven’t heard in awhile. It comes from their album Toto IV. 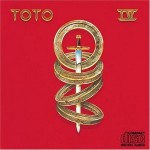 David Paich and Jeff Porcaro had played together as session musicians on several albums and decided to form a band. David Hungate, Steve Lukather, Steve Porcaro and Bobby Kimball were recruited before their first album release. The band enjoyed great commercial success in the late 1970s and 1980s, beginning with the band’s self-titled debut released in 1978. With the release of the critically acclaimed and commercially successful Toto IV (1982), Toto became one of the best-selling music groups of their era. They are best known for the Top 5 hits “Hold the Line“, “Rosanna“, “Africa” and “Georgy Porgy“. Although their popularity in the United States diminished in the 1990s and 2000s, they remained popular internationally, playing only a small number of shows in the USA. Several changes to the lineup have been made over the years. In 2008, Lukather announced his departure from the band, and the remaining band members later went their separate ways. In the summer of 2010, Toto reformed and went on a short European tour, with a new lineup, to benefit Mike Porcaro, who had been diagnosed with amyotrophic lateral sclerosis (ALS).[1]

The band has released a total of 17 albums, and have sold over 35 million albums to date. The group was honored with several Grammy Awards and was inducted into the Musicians Hall of Fame in 2009.