Deprecated: add_option was called with an argument that is deprecated since version 2.3.0 with no alternative available. in /home/gx4q2mavglh5/public_html/wp-includes/functions.php on line 5155
 Vinyl Schminyl Radio Classic Deep Cut 7-20-12 - The title of your home page
You are here: Home / Music / Classic Rock / Vinyl Schminyl Radio Classic Deep Cut 7-20-12

One of my favorite Laura Nyro covers done up right by Three Dog Night..hey that rhymes! Give it a listen please. 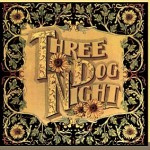 The band started in 1968 with three lead vocalists, Danny Hutton (who got his start with Hanna-Barbera Records in 1965), Chuck Negron, and Cory Wells (who landed a recording contract with Dunhill Records). They had made some early recordings in 1967 with Brian Wilson and initially went by the name of Redwood. Shortly after abandoning the Redwood moniker, the vocalists hired a group of backing musicians – Michael Allsup on guitar, Floyd Sneed on drums, Joe Schermie from the Cory Wells Blues Band on bass, and Jimmy Greenspoon on keyboards–and soon became one of the most successful bands in the United States during the late 1960s and early 1970s.

Three Dog Night earned 13 gold albums and recorded 21 Billboard Top 40 hits, seven of which went gold. Their first gold record was “One” (US #5), which had been written and recorded by Harry Nilsson. The group had three US #1 songs,: “Mama Told Me Not to Come” (Cory Wells on lead), which was also their only Top 10 hit in the UK; “Joy to the World” (Chuck Negron on lead); and “Black and White” (Danny Hutton on lead). Coincidentally, each one featured a different lead singer. Dunhill Records claimed 40 million record albums were sold by the band during this time period.

Joe Schermie was replaced by Jack Ryland in 1973, and the band then became an eight-piece with the inclusion of another keyboard player, Skip Konte (ex-Blues Image). In late 1974, Allsup & Sneed left to form a new band, SS Fools, with Schermie. New members James “Smitty” Smith and drummer Mickey McMeel were recruited but by 1975 Smith was replaced by Al Ciner from Rufus and The American Breed and Ryland by Rufus bassist Dennis Belfield. By 1976 their run of hit records had ended and Hutton was succeeded by Jay Gruska. However, this lineup was short lived. Another former Rufus band member, Ron Stockert, was recruited as second keyboardist after Konte left that same year. After a summer concert tour was cut short, the group played their final show at the Greek Theater in Los Angeles on July 26, 1976.[2]

In 1981, Three Dog Night reunited and released the ska-inspired “It’s A Jungle” in 1983 on the small Passport Records label, which garnered some airplay on the New Wave circuit. The EP failed to sell after Passport went bankrupt. The reunion featured all of the original members, except Joe Schermie, who was succeeded by Mike Seifrit until 1982, and then by Richard Grossman, who stayed until 1984. Two guitarists, Paul Kingery and Steve Ezzo, occasionally played with the band, filling in for Allsup for the next two years, and eventually replacing Allsup when he departed in late 1984 to take care of some personal and family matters. Sneed was let go from the band at the same time. In 1985, a spring and summer tour was postponed after Negron and Greenspoon were forced to enter drug rehab, and the band hit the road in late 1985 with a revived lineup that included guitarist and vocalist Kingery, bassist Scott Manzo and drummer Mike Keely.

By December 1985, after a relapse into his drug habit, Negron was let go, and the group continued with Wells and Hutton fronting the band. In 1986, their song “In My Heart” was featured in Robotech: The Movie.

There were more changes in personnel when guitarist T.J. Parker and vocalist and bassist Gary Moon replaced Kingery and Manzo in 1988, and were replaced themselves by Mike Cuneo and Richard Campbell during 1989. Allsup returned to the group in the spring of 1991, and Pat Bautz succeeded Keely as drummer in 1993.

In 1993, Three Dog Night performed for The Family Channel show Spotlight on Country, filmed in Myrtle Beach, South Carolina. Kingery returned as their bass player in 1996.

Negron was eventually able to clean up his life and has been drug-free since September 1991. He is currently pursuing a solo career. Original bassist Joe Schermie died on March 26, 2002.

In 2007, Sky Television launched a new ad campaign in the UK. The campaign promoted the company’s aspirations to be seen as an environmentally friendly company, and used the band’s song Joy To The World.