It’s Birthday Week this week and Jim Armstrong of Them has one today..I know he didn’t play on this song but what the heck?? 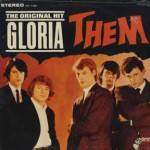 Them were a Northern Irish band formed in Belfast in April 1964, most prominently known for the garage rock standard “Gloria” and launching singer Van Morrison‘s musical career.[1] The original five member band consisted of Morrison, Alan Henderson, Ronnie Millings, Billy Harrison and Eric Wrixon.The group was marketed in the United States as part of the British Invasion.[2]

Morrison quit the band in 1966 and went on to a successful career as a solo artist. Although Them had a short-lived existence, the Belfast group had considerable influence on other bands, such as The Doors.[1]