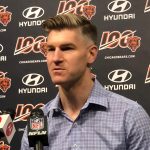 Draft season is upon us, and after the typical ebbs and flows, falls and reaches of the first round of the 2019 NFL Draft, the Chicago Bears will get their chance to add to their playoff-caliber team. A successful season and a roster with few holes left the Bears with little to worry about, particularly the first night, where they were without a pick as a result of the … END_OF_DOCUMENT_TOKEN_TO_BE_REPLACED 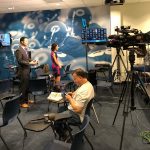 During the Bears 2018 season, we interviewed several members of the media covering the team on a daily basis. These are incorporated into our upcoming book release "Return to Respectability." Here are the complete audio interviews, with written excerpts. They were used as part of our radio show / podcast The Sports Report. Patrick Finley of the Chicago Sun-Times on the … END_OF_DOCUMENT_TOKEN_TO_BE_REPLACED

with Packer Dave and Steve Leventhal Joining us this month are Dionne Miller of ABC7 Chicago, just back from Arizona, to talk Spring Training and a some Bears football. Jeff Rich chimes in on NBA hoops, and Adam Lucas, UNC beat writer from GoHeels.com previews the Duke-Carolina game and the ACC Tournament for us. Don't miss cameos from Pat Hughes and Bill Raftery. … END_OF_DOCUMENT_TOKEN_TO_BE_REPLACED

with Packer Dave, Steve Leventhal, and John Poulter Join us for a Super Bowl LIII (aren't these Roman numerals getting lame by now?) preview, plus final thoughts on the Chicago Bears and Green Bay Packers' seasons. Steve highlights the top teams in college basketball to watch out for. Dave sings the praises of the Milwaukee Bucks. John gives us a mid-season update on the … END_OF_DOCUMENT_TOKEN_TO_BE_REPLACED

with Packer Dave, Steve Leventhal, and John Poulter On the Sports Report this week, Dave and Steve discuss the hiring of a new Green Bay Packers coach, and the surprising end of the Chicago Bears season. Plus, we preview the NFC and AFC Divisional games this weekend. In the second segment, John joins us to talk NHL hockey and English Premier League soccer. Hear … END_OF_DOCUMENT_TOKEN_TO_BE_REPLACED